After the formation of the gerrymandered, sectarian "Protestant state for Protestant people," the Catholic minority community suffered decades of discrimination, inequality and sectarianism. Essentially second class citizens, many were forced many to emigrate. In spite of this, demographic change started to occur in the 1960s which saw the number and proportion of the Catholic population begin to increase. 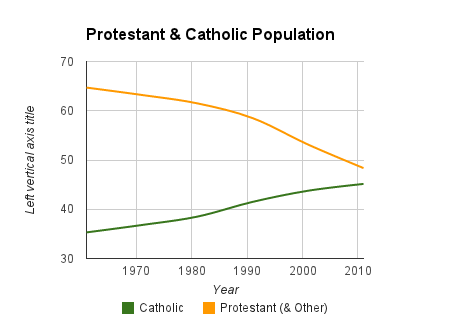 Partition was not kind to the Nationalist political parties either who obtained the vast majority of its support from the Catholic minority community. Majority Unionist rule led to gerrymandering and denial of the right to one man one vote.

As demographics changed and the Catholic population grew so too did the Nationalist vote. Nationalists which once made up a mere 18.9% of the vote, had by the time the Good Friday Agreement was signed in 1998 almost reached parity with Unionists. 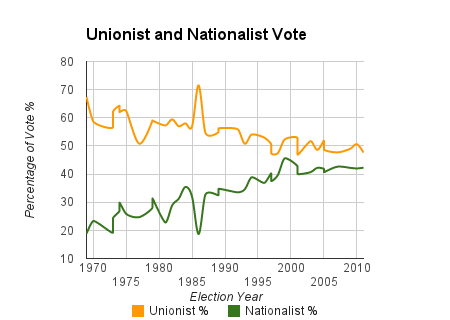 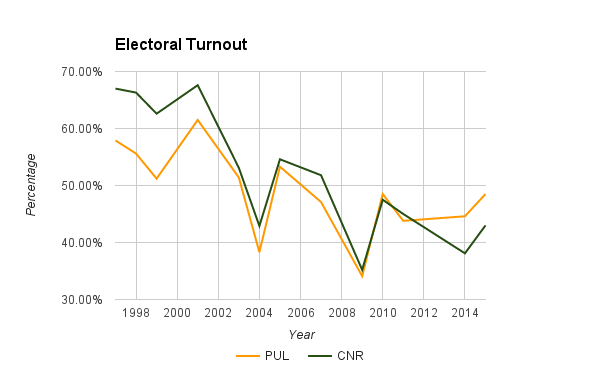 There were two significant events which took place between the 2011 and 2014 elections which could have caused the Unionist turnout to increase well beyond that of Nationalists.

On 4th December 2012, Belfast City Council with it's first ever Nationalist plurality voted to change the policy of flying the Union Flag from City Hall. Instead of the flying of the flag 365 days per year it would only be flown on 17 designated days. The Union Jack which had flown over Belfast City Hall every day for more than a century was taken down.
There was an electoral canvass in 2013. Basically the Electoral Office NI wiped clean the electoral register, an electoral canvass took place in each constituency and a new electoral register was published. The new register contained details of 1,241,079 electors out of an eligible electorate of 1,405,808 based on the 2011 census. The new register contained 88.3% of the eligible population. Could it be that the new register contained a much higher proportion of additional potential Unionist voters than Nationalist voters? The Loyalist reaction to the removal of the Union Jack from Belfast City Hall was bedlam on the streets. Could the overall Unionist reaction have been getting the maximum amount of additional potential voters onto the electoral register?
Clearly Unionists have become more motivated to turnout and vote. But that is only one side of the equation and not something Nationalist can change. What can be changed is the huge increase in apathy among their own base.
In order to resolve this major problem the reasons for increasing apathy must be identified. Then solutions must be formulated.
Possible reasons for Nationalist voter apathy:
Possible Remedies: